Standing at a statuesque of 5 feet 9 inches, the sadistic raven haired beauty, Austin Lynn, holds nothing back in this brutal beatdown. Sporting her purple boxing gloves and matching sports bra, Austin quickly unleashes hell on her victim as she comes out swinging. Delivering commanding punches to her opponent’s jaw and stomach, Austin follows them with thunderous kicks to his body as her proficiency in Muay Thai kickboxing is on full display. Cornering her prey, the southpaw Austin unleashes her first of many nasty left hooks to her slave’s jaw, dropping him to the mat in just over a minute. Continuing her savage onslaught, Austin sends her victim into the wall with a powerful kick, as she ruthlessly punches her grounded opponent in the back of the head. Easily breaking down her punching bag’s defenses, Austin continually exposes his jaw for her infamously brutal left hook. Imposing her will with knees to her adversary’s ribs and combinations to his body and face, Austin delivers a merciless left hook that puts her opponent out for good in just over 7 minutes. Standing triumphant bare foot on stomach, Austin poses in victory fashion in one of our nastiest beatdowns ever - grinning with immense sexual gratification from her love of beating up boys. 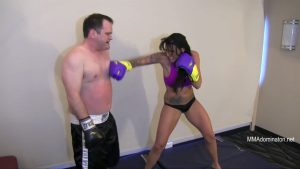