The powerfully built 5'9" Austin Lynn takes on the heavier masked male in a mixed wrestling rematch. Austin's MMA skills let her quickly take control of her larger opponent, even when it seems like he might have her in trouble. She wrestles her way on top of him, and suddenly has her thickly muscled legs wrapped around his neck. Her victim struggles between her legs, unable to escape. Austin is toying with her male opponent, taking delight in his suffering as she proves the superiority of her wrestling skills. She even throws some strikes in while she has him vulnerable, for good measure. The "bitch" man taps over and over again, to the point where Austin feels he is tapping out too quickly and she wants him to suffer for longer. Choke after choke, scissor after scissor, until the bitch boy finally goes limp in Austin's final choke hold. "Way too easy", declares Austin Lynn as she poses and flexes over her decimated male foe. 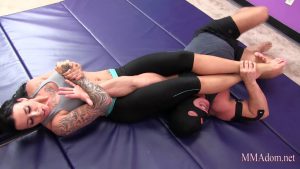