Starring in her FIRST EVER beatdown video, the famed model and internet sensation, Erika Jordan, shadowboxes for the camera, POV style; as she gives you an up close and personal view of what it feels like to be hit by her purple boxing gloves. Touching gloves with her victim, the action begins as the enraged German comes out firing with three hard rights to her slave’s jaw. Mercilessly beating her human punching bag around the ring, Erika scores her first knock down at the 3 minute mark with a vicious right cross to the face. The visible swelling around the slave’s right eye doesn’t stop the nihilistic Erika from attacking her prey, as she continues to beat him down with rights and lefts to the chin and stomach. Making sure this is one beatdown her victim will never forget, Erika unloads rapid fire combinations to his stomach, followed by a blatant blow that sends him down to the mat. The heartless Erica continues to beat her slave with a powerful ground and pound, for rules don’t apply to this sexual sadist. The dominant Erika commands, “On your hands and knees like a fucking dog!” as she batters her submissive with kidney punches. Clocking him with a straight right to the nose, Erika forces the red stuff to visibly leak from his nostrils and onto his stomach. Erika finally unleashes a sadistic knockout punch that puts her slave out for good-standing foot on face while posing in triumph. Stay tuned for a special post-beatdown interview from Erika Jordan. 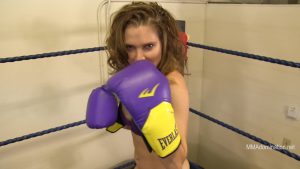