The infamously brutal dominatrix, Goddess Tangent, has returned in the role of famed Bond villainess, Xenia Onatopp, in this violent scissor video. Bringing her slave into her element, the dungeon, Tangent begins his torment with a school girl pin. Shoving her prey off the bed and onto the floor, Tangent begins her interrogation for the hidden keycard. Clamping on a straight headscissors, Tangent dominantly states, “You’re going to give me exactly what I want”.  As Tangent applies a straight throatscissors, she squeezes with full force demanding the intelligence she needs as her slave taps pathetically for his life. Militantly commanding, “Where is the keycard?” Tangent is given a false location by her brash victim. Infuriatingly stating, “I tried to be merciful”, Tangent whets her voracious appetite for sexual sadism with yet another savage scissorhold. Applying maximum pressure to the throat with her thighs, Tangent forces her slave to spit up from the immense force on his trachea.  Crushing his skull in a side headscissors, Tangent at long last receives the elusive keycard. “Mercy” begs her pathetic deviant slave; “I don’t do mercy,” states the beautiful and merciless Goddess, burying her quads deep into his carotid artery delivering a 100% REAL knockout. Mission complete - exiting the room with keycard in hand. 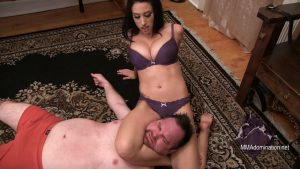