Standing at 5 ft. 10 in. and weighing 160 lbs, the Musclebound, Amazon Rapture, puts on her red MMA gloves in this brutal beatdown. Clad in her black bra and thong, Rapture wastes little time as she comes out firing punches to her slave’s belly.  Pounding her human punching bag, Rapture knocks him off his feet 30 seconds in with a nasty right to the ribs. Using her grappling prowess, Rapture subdues her adversary with a rear naked choke, unloading an empathetic ground and pound to her victim’s face and stomach.  Trapping her prey in a scissorhold between her revered quads, Rapture simultaneously opens fire with punches to his exposed body. Emasculating her slave even more, Rapture makes fun of his fetish for “Getting his ass kicked by girls”. Effortlessly tossing the fatty to the ground, the female bodybuilder hammers away with yet another ground and pound to the face and chest of her prey. Aroused from inflicting pain, the sexual sadist commands her opponent to his feet for further punishment.  Sending her slave to the floor again with a knee to the solar plexus, Rapture immediately pounces on her victim with another rear naked choke and mockingly asks, “You want to go to sleep little bitch?” Continuing to fire off rapid combinations to her slave's stomach, Rapture unloads a merciless knockout punch to his jaw - apathetically standing foot on face of her fallen opponent, posing her massive biceps in victory fashion. 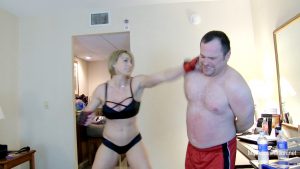