Making her first ever appearance on camera, the petite yet brutal Domina Reina Simone debuts with a vengeance in this heinously violent beatdown. The sinister Krav Maga practitioner does not disappoint as she wastes little time firing vicious combos to the chest and arms of her human punching bag.  Unloading a series of 5 vicious right crosses to her slave’s jaw, Reina drops him to a knee in under 45 seconds. Without hesitation, the biracial dominatrix continues to destroy her helpless victim with a series of powerful kicks to his stomach. The sexual sadist relishes in the damage she's delivering, as a nasty right hand causes a welt to form over the eye of her prey. Continuing her unrelenting pace, Reina nearly caves in the chest of this loser with a barrage of full force backfists. Ripping off the tank top of her slave, Reina takes pleasure in seeing how red his belly is from her vicious punches. Continuing with rights and lefts that echo throughout the dungeon, Reina knocks her slave to the ground with a ferocious right. Removing her MMA gloves and blouse, Reina reveals her sweaty muscular physique, as she cold cocks her bitch in the jaw with a bare-fisted punch. Proficiently locking her lithe arm around the carotid artery of her victim, Domina Reina refuses to relinquish the hold until she delivers a 100% REAL knockout - standing atop her comatose prey in victory fashion. Stay tuned for a special post interview with Reina Simone about her first ever video. 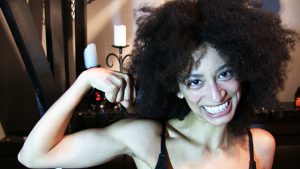